Some animals have an incredible memory. They can remember your face for ages or they can hold a grudge forever.

We start by looking at sea animals with a good memory and then we look at land animals and birds.

Sea Animals with the best memory We need to take a close look at some of the aquatic animals with really long lifespans. Because you can’t really talk about long memory if you only for a couple of years, right?

These are some of the long-living animals of the sea who has an incredible memory.

Dolphins are not only one of the animals of the best memory they are also one of the smartest animals on the planet.

People have been training Dolphins to do all sorts of tricks in Marine parks for many many years. This has led to a very special bond between the Dolphins and humans.

You might recall Hollywood movies featuring very elegant and clever dolphin tricks. This takes a lot of practice and we need an animal with an exceptionally good memory in order to make it work.

Biologists have reported Dolphins to have the longest memories in the animal kingdom.

According to these studies, Bottlenose Dolphins have been able to remember the sounds of other Dolphins over a period of 20 years. Each Dolphin has it’s own unique whistle sound which is distinguishable to other Dolphins. Many fishermen have reported whales to recognize their boats after a long time.

Whales have also been known for a long time to migrate along the same routes for several years. They will head south in the winter when the water becomes colder and they need good memory in order to find their way through the ocean.

You can read more here about why animals migrate. There are some really cool facts!

Land Animals With The Best Memory

Again we need to look at animals with a long lifespan in order to find the terrestrial animals with the best memory. Elephants are really nice and loyal animals who take care of each other.

Scientists have found that elephants keep a map of all the water holes in their area. They always know where to go to get water for the little ones.

This shows a very good memory among adult elephants. Most dog owners will let you know how good memories their dog has.

This is also why we can train dogs to learn a lot of tricks and to behave well.

Dogs wouldn’t be good service dogs and able to assist police officers if they weren’t able to remember a whole bunch of stuff. They can also recognize their owners after a very long time.

There are numerous examples of dogs who have found their way home after being away for a long time. This takes good memory skills and dogs are certainly among the most intelligent creatures in the animal kingdom. Apes and monkeys have very good memories. They are able to perform complicated tasks and they can remember what they learn.

They are probably this species we humans have done the most memory testing on.

They have been known to remember forms and signs and be able to sort puzzles and sort things. This shows us that apes and monkeys have at least some photographic memory. They can also be taught a long list of hand gestures and signs in order to communicate with humans.

The Rhesus monkeys have shown an amazing ability to be able to learn from past experiences. They will remember what happened last time that did the same thing.

Birds are also good at remembering places and routes. They can fly back the same route they came and they can keep many different routes and items in their long-term memory. They can fly over long distances and always come back to the same point. They are territorial animals which means they will cover a certain territory. They use sounds to communicate with each other about what’s going on.

Ravens and Crows will live for 20 to 30 years. This allows them to learn a lot during their lifetime and they use their fantastic memory to remember where everything is. They can also remember people’s faces.

You can read more amazing facts here about the Ravens. Parrots can live for up to 80 years.

You wouldn’t think so when you take a look at the size. Normally lifespan has to do with how big the animals are and how big the heart is. But not with the Macaws. Biologists still have to figure out why these amazing birds can live as long as humans.

Parrots can remember people for a very long time.

And they are able to learn a whole list of words which they can distinguish from each other and used at the appropriate time.

In order to do so, you need a good memory and you need to be able to store all that information and understand it to some extent.

Which Animals Have The LARGEST Memory?

We have talked about long memory but who has the largest capacity for memory in the animal kingdom?

In this case, we have to look at the Birds. 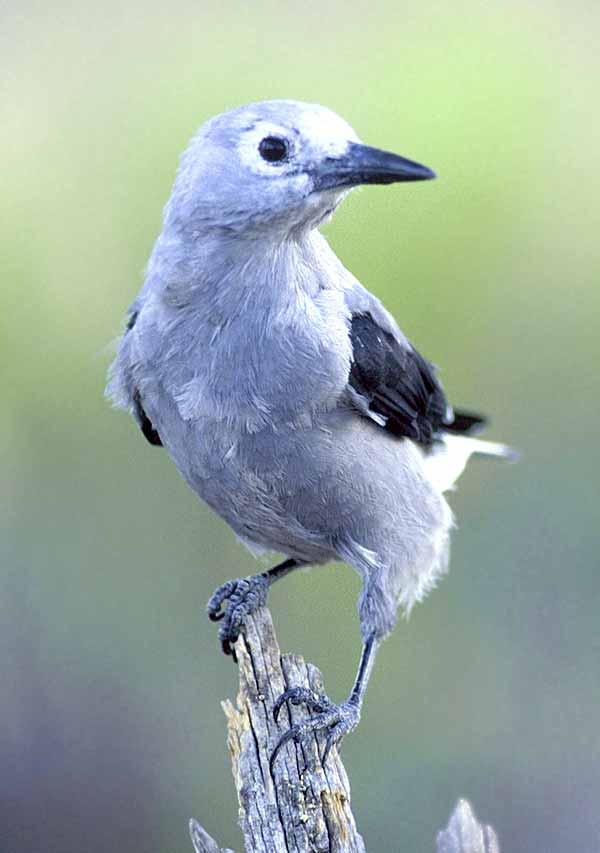 The Clark’s Nutcracker has been found to store up to 20,000 different locations in its brain. We are talking about memory it can bring into play when it needs to feed.

According to a study, the little bird can bury up to 100,000 seeds in the forest. After 9 months it was able to locate a huge part of these locations in order to eat the little seeds.

According to the Biologist Diana Tomback, it can hold up to 150 seeds in the mouth (at the same time!). And it will fly out and bury these in the ground in order to have food for the cold season.

The bird probably has to remember much more than the 20,000 different locations. In order to remember a specific location, you need to remember some of the surrounding things as well. So the bird will probably remember several rocks or trees in order to pinpoint each location.

Animals With The Shortest Memory?

You have probably heard that goldfish’s memory is no good. It is often used as an example of how bad memory can be. But it is actually a myth. Studies have shown that goldfish can actually remember items for longer periods of time.

So who in the animal kingdom has the worst memory?

This is not something we could find much research about.

But it seems like most animals have a very bad short-term memory when it comes to events that are not critical to survival.

According to the Swedish animal specialist Johan Lind at the University of Stockholm, animals have only around 27 seconds of memory. That’s when we are talking about short-term memory.

Unless the events in question have any importance related to food or survival the animals could not remember what happened. They seem to only remember casual events when it’s related to basic survival.

It seems like humans are the only creature with the memory capacity to remember more than a few minutes.

8 Animals with no memory at all! We have written before about animals that don’t even have a brain.

This list of animals will not have a memory like you and me. Because you need a brain in order to store information as memories.

All animals without brains (and brain memory) are sea creatures.

In order to survive without any sort of memory at all, you are dependent on food being served for you. You cannot perform any activity seeking for food if you have no brain function whatsoever. And in the deep waters, animals like Jellyfish eat without opening a mouth.