Some animals have huge eyes compared to their size. They tend to mesmerize us with their intense staring.

In this article, we zoom in on 10 different animal species which all have one thing in common. Their eyes.

The first contender for the title “animal with the cutest eyes” is a cat. Not surprisingly, we have several cats with very beautiful eyes. After all, they are one of the cutest and most adorable friends from the pet world! These amazing creatures hail from the forests in South America. They are only around 5-6 inches (12- 15 cm) and they shouldn’t be kept as pets for a very simple reason.

They are an endangered species and they are not suited as pets.

But that should not stop us from adoring them and the best way to help them survive is probably by telling their story and raise awareness about their existence.

They can look a little different from the species above.

This is another cute little monkey. It’s a baby so the eyes appear even bigger.

A typical feature for baby animals as well as human babies: The Sphynx is a very special cat. Not only does it have very intense eyes, but it also has almost no coat. This makes it look almost naked and you instantly feel like taking it in and take good care of it.

It has been “created” through a careful breeding process. According to some careful DNA testing, it’s actually a mix between several crossbreeds. It also looks incredibly cute as a kitten! You immediately recognize the wrinkly skin and lack of hair on the body.

Here is a two-week-old female Sphynx cat trying to learn to walk. They are actually quite popular as pets. They have almost no hair which makes them easy to keep in that regard but that feature also comes with some downsides as well.

You have to be careful not to expose them to direct sunlight too much. They will easily get sunburn due to the lack of hair.

And they also require more baths than other cats.

They cannot be outside on their own in colder climates. During the night they might freeze and need to get inside.

Time to take a look at another common pet with super cute eyes. Bunnies are also super-popular pets for that same reason: Their unbelievably cute eyes.

They can have many different eye colors but normally they will be very dark unless we are looking at an albino rabbit. They will have red eyes and white fur and they look quite different from other rabbits.

That’s another reason they are very popular to keep as pets.

This also means that they can get you in trouble if they are bored. They will start digging their way out or they might start to chew on ANYTHING you have laying around.

So don’t leave your rabbit unattended outside the cage!

Owls also have very big eyes. They can see in the dark because the eyes have more flatform than human eyes.

In fact, the only animal believed to have better night sight than owls are cats. The Great Grey Owl actually has bigger eyeballs than humans. The large black pupils are perfect for letting in the dim light and enable the bird to see more than other night creatures in the dark.

Because of the special structure of the eyeballs, owls cannot really move their eyeballs. So instead they turn the entire head in order to look to the side. They can turn the head 3/4 of a full circle (270 degrees). 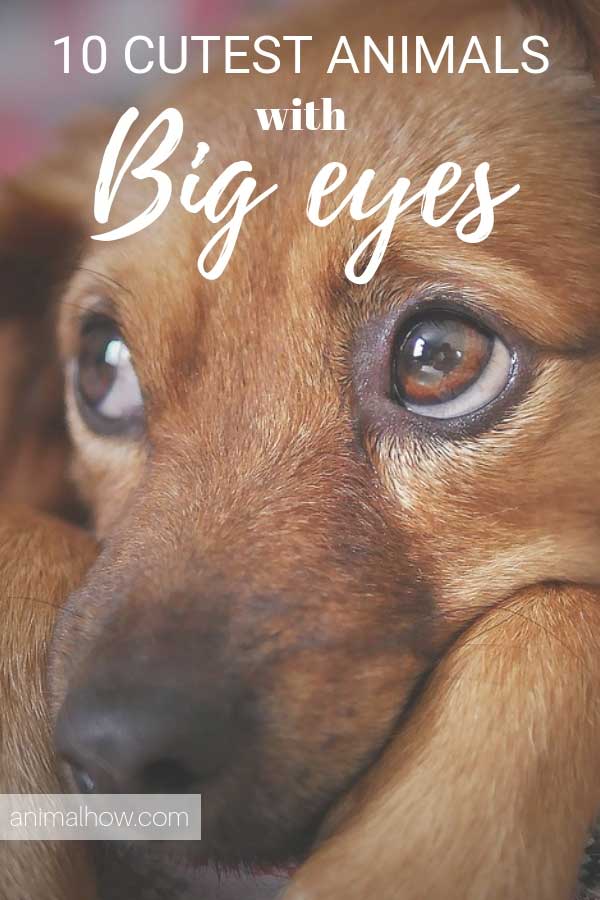 Puppy eyes are the cutest. Right? And that’s also due to their big size as well as the gorgeous colors and similarity to human dyes.

They have many different colors (often brown) and the white color makes them look very human.

There’s a good reason why we call it “puppy eyes” when someone tries to convince us to do something for them by putting on their absolute cutest look!

Who can say no to a pair of puppy eyes anyway?

You just have to give in and give them what they ask for! The most colorful eyes in the animal world probably belong to Chameleons.

They have several layers of colorful skin on their eyes and they are masters of disguise. They will often be hard to spot because they can blend in and even the skin around the eyes can work as camouflage!

They can actually move their eyes quite a lot and they are one of the few animals with 360-degree vision due to a very unique eye construction! Their eyes can rotate much more than human eyes (and most animals) and they can switch between what is called monocular and binocular vision.

That means they can choose to look at the same object with both eyes (like humans) or they can use each eye individually to form two images! We have to mention this big-eyes little guy in an article about animals with huge eyes. It has a very intense stare and you cannot avoid noticing how big its eyeballs are compared to its head!

Actually, its eyes are sometimes larger than its brain!

Some lizards also have adorable eyes. They can be very colorful and expressive like this green and blue lizard with yellow and black eyes: Lizard eyes are not that different from human eyes. They have eyelids to keep the eyes moist and they work together to form one image.

But the colorful skin and the wrinkles and skin layers around the eyes make them look very unique and almost intelligent like small dinos. Something they have in common with the Chameleons.

Some Lizards even have a third eye located on top of their head between the two larger eyes. It is used to control hormone production according to how light or dark its surroundings are. The Lemur has strong yellow eyes. They are large compared to the tiny shout and the small body mass.

Other Lemurs have blue eyes which can be many shades of blue like light sky-blue, grey-ish blue and darker blue colors. The last animal we have included in this article is the Tre Frog.

It has impressive eyes that are placed at each side of the head. Together they form a very good visual of what’s going on around them.

On top of the cute red eyes, the mouth is shaped just like a smile. Super cute!

As that wasn’t enough to make them stick out, the feet have tiny cups with a suction-like mechanism that helps them climb on most surfaces. Very impressive!