Ever wondered which animal’s eyes glow in the dark? Or maybe you are wondering how to recognize a set of glowing eyes in the dark?

Let’s look at some common animals with glowing eyes at night as well as some of the more extraordinary hunters and nightcrawlers.

These are the most typical animals to reflect back the light at night. Whether you point a flashlight at them or they simply just appear to have glowing eyes when being caught on camera.

Which Colors Do Animal’s Eyes Glow At Night?

When you meet an animal at night with glowing eyes the color will typically be:

(The ladder is a mix between red and yellow)

In this article, we will take a good look at all these animals. We will also list them by eye color according to a set of photos. Just remember that you cannot know for sure that animals will always have the same colored glow at different times.

We will come back to this at the end of the article – now it’s time to look some of these amazing night creatures in the eyes!

Which Animals Have RED Eyes At Night?

Several animals can have red or orange glowing eyes at night. This is because they have a reflective layer behind the eyeballs which enables the lights to get reflected back toward the viewer.

That perceived eye color at night depends on several factors like the animal’s actual eye color, the light source, and how the retina is constructed.

Gators crocodiles have pretty large eyeballs compared to their size. They will often appear red in the dark and leave them looking even more terrifying than they do before night time. Another animal wood red or orange eyes in the dark are the Owls. They typically hunt right before dark and they have incredibly good hearing. But they also have pretty good eyesight as well.

The eyes really stick out in the forest when you notice the two red dots staring right at you.

Owls have especially big eyes in the animal kingdom. Their eyes are constructed more like a tunnel-shape which means they have to turn their head in order to look around. This is no problem though because Owls can turn their head 270° around.

The dark orange eyes are very pretty and they are probably the reason why Owls symbolizes wisdom and knowledge. 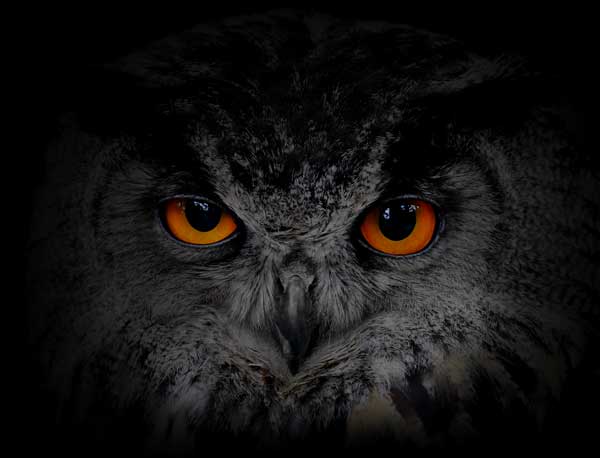 Rabbits also have very special eyes. They will typically appear to have a light red tone in the dark if you catch them on camera or point a light source toward them. They can also be orange or even pinker red.

Again, the red color comes from the light being reflected at the back of the eye.

They also have a reflective layer behind the eyeballs which reflects the light back at you when you look at it. We will explain this feature in great detail toward the bottom of this article. 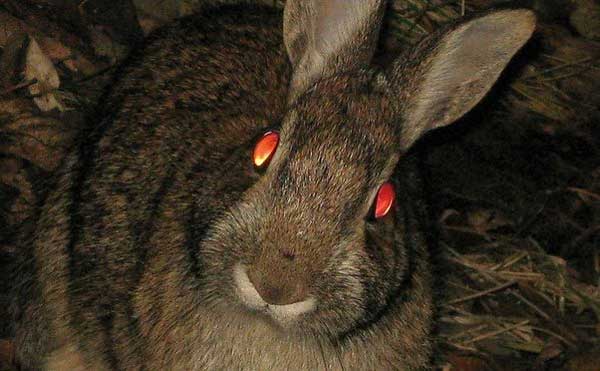 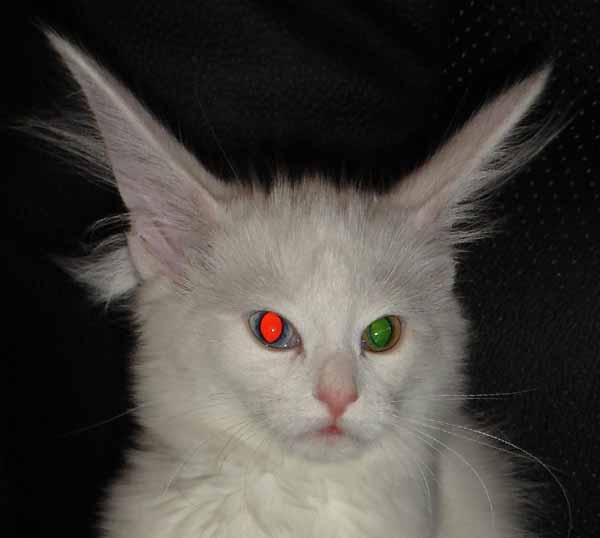 Which Animals Have YELLOW Eyes At Night?

Now let’s change the focus to animals with yellow glowing eyes for a moment. This is a very common feature among animals and we find quite a lot of species with glowing yellow eyes at night.

Bears are one example. In the daytime, they normally have dark brown eyes. But when the light reflects at night they typically appear bright yellowish.

Check out these bears staring at the driver.

They could probably scare most people if you saw them at night!

As we mentioned above, cats can have all sort of eye colors. This cat is staring at the photographer with bright yellow eyes that could pierce you.

Eye color is determined by two pigment colors called melanin and lipochrome. The blend of pigment (or lack thereof) determines which color the cat’s eyes will have. But at night time the light can change the eye color by reflecting only parts of the light spectrum.

These two sets of yellow cat eyes look pretty scary in the dark! Another animal you typically can encounter at nighttime is the Deers. They will often stare right at you when you are driving or walking by a forest.

The eyes of the deer will often light up with a yellow tone at night simply because the light is reflected back. Another animal you might have in front of you when you notice a yellow set of eyeballs is the raccoon.

Raccoons are also nocturnal animals and therefore also have the reflective layer behind the eyes. They will typically reflect yellow light back of you.

Here is a cute little fella eating an apple in a tree. The yellow eyes really light up in the dark and they seem to be very focused on the photographer. The last animals we will look at with yellow eyes in the dark are the Panthers. They are large cats that hunt at night and their yellow eyes are very intense. Which Animals Have GREEN Eyes At Night?

When you do see glowing eyes in the dark it will often be a cat or a dog. This is simply because these are some of the most common animals around areas where people live. The eyes of the fox are also very intensive at night. They typically keep to themselves at night when they hunt. But if you do encounter them you should look for green (or yellow) eyes in the dark.

This fox has a mix of green and white eyes as he stares at you. Opossums will often leave a green reflection when they are lit up at night. Here are five Opossums in a tree. Which Animals Have WHITE Eyes At Night?

Sometimes animal eyes will reflect a white light at night. We will finish off by looking at a couple of animals with bright white eyes in the night.

These three species have all been photographed with a flash on the camera. That enables the light to be reflected back as a very white and bright color.

Hear the photographer has caught a coyote with his/her lens. The coyote stairs right at the camera and the eyes are very white. As we looked at previously, Deers will often have yellow eyes in the dark. That’s sometimes the eyes will appear with a very bright white color.

This is especially true if you use the flash on your camera. The white light from the flash will be reflected at the back of the eyes and return a purely white color for the photo. This is not the guy you want to meet at night. It’s a Tiger with white eyes staring right at you in the snow. It’s hard to spot in the snow at night but the eyes give it away. Other animals with reflective eyes (Tapetum Lucidum) include:

As you can see most of these animals are nocturnal carnivores but we also have deep-sea animals on the list.

It’s especially important to see well if you are a predator in the sea (or if you are being hunted!). The water can make it hard to distinguish patterns and movement in the dark so big eyes with retroreflectors can really help here!

Why Do (Some) Animal Eyes Glow At Night?

We find this feature among several vertebrates.

The reason why some animals have glowing eyes at night is due to a thin reflective layer behind their eyes (behind the iris). It is called “Tapetum lucidum“. This layer reflects the light back at you when you look at the animal in the dark. This phenomenon is also sometimes referred to as “eyeshine”.

This means that the light travels through the retina twice and is reflected back in a wide variety of colors.

This also means, that the light you see is just the reflection of the light source pointed toward them. This will typically be a flashlight or a camera flash. When the light is reflected back it can have the colors red, yellow, green, or white.

The light is reflected directly back toward the direction of the light source in order to let the retina have a clear and more vivid image to analyze. For cats, the reflective effect increases the vision by more than 40% thus giving the cats incredible night vision. It’s a genius way to add more light to the retina. Animals without this feature (and humans) will only have the light pass through the retina one time. But the reflection adds more light and detail to the retina in order for the animal to see better in the dark.

This lets our nocturnal friends see better and further in the dark. It’s both an advantage for the predators and for the prey and it’s a good reason to stay indoors if you live around wild animals. They will probably have way better night vision than you do!

So does this mean that you can recognize animals by their eye color at night?

The reason is that you cannot know for sure that an animal will always reflect the same color back at you. It can vary greatly due to several factors we shall look at below.

Sometimes the color will be yellow and other times it might be green or even white.

As we looked at above it all depends on several factors:

So you cannot know for sure that a certain species will always reflect the same eye color. When you look at how the eyes glow at night, you will notice above that we have deers and cats with both yellow and green eyes, for example.

You will need to know more facts about the animals in order to recognize them at night. It’s much better to look at the animal’s behavior, speed, size, etc.

If you can only see the eyes of the animal you should try to determine how much space there is between the eyes and how far from the ground they are. If it’s a big animal with large eyeballs you should keep a safe distance. But to remember that even small animals can be dangerous at night.

So if you don’t know what you dealing with you should keep your distance and make sure not to stare directly at the animal as it can stir up aggression in some species.

Why Do Animals Have Better Night Sight?

As we mentioned above, some animals have a reflective layer at the back of the eye enabling them to see better in the dark. But that’s not the only reason why they have better night’s vision.

Another reason is that they are able to see a wider spectral range of colors.

What colors do human eyes reflect at night?

Human eyes would always reflect a red color. This is because we do not have the reflective layer behind the retina (tapetum lucidum). Therefore the light will not be reflected back toward the photographer or the viewer.

So if you do see a human set of eyeballs lighting up in the dark it is typically because they are being photographed. They will appear red because of the blood vessels in the retinas in the eyes.

The light from the flash will enter through the center of the eye called the pupil (the black part) and its size is determined by the iris muscle. If the pupil is small there won’t be sufficient light to lit up the blood in the eye. This is why red-eye reduction software lets the camera’s flash blink an extra time just before the photo is taken in order to let the eye reflect off the light of the flash instead of letting it into the eye.